This is a guest post from Lisa Krakosky, an Orlando-based animal shelter volunteer.

“What’s FIV?” the potential adopter asked. As I started to give an explanation, I was cut off. “Well, what about these ones,” the person said, turning to a different cage of kittens. “Do they have FIV?”

Unfortunately, cats and kittens with FIV (Feline Immunodeficiency Virus) are often passed over for adoption in shelters. This is due to general lack of knowledge about what FIV actually is, how it is spread, and how it may affect a cat’s lifespan.

My husband Jeff and I have volunteered and fostered for the Pet Alliance of Greater Orlando for a little over two years. During that time we have fostered 100 animals. We have fostered a couple adult cats and dogs, but most of our fosters have been kittens: bottle babies, weaned kittens, and kittens with a nursing mom. The story I’d like to share below is of one of our recent litters, “The FIV Five”: Emma, Ethan, Mason, Lucas and Liam. 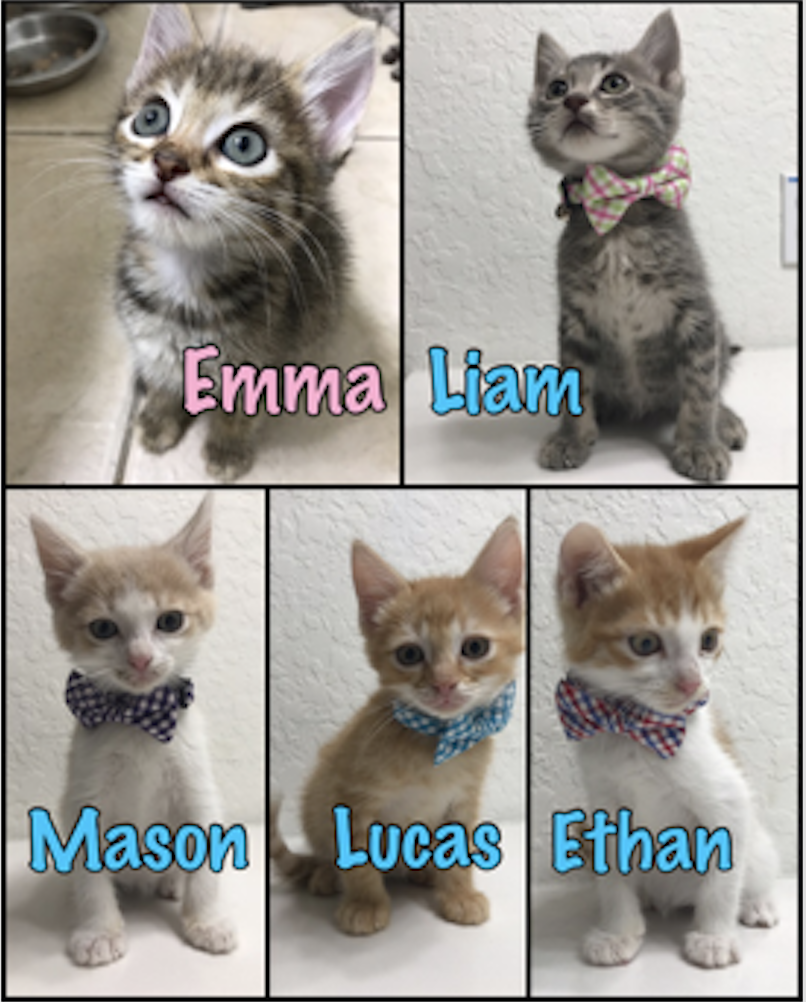 We referred to them as the “Easter kittens” — a litter of five scrawny six-week-olds that we’d picked up on Easter day. They were malnourished, anemic, and infested with fleas. We spent the greater part of the following two weeks trying to stimulate their appetite and stabilize their weight, giving them Dawn baths and picking fleas off them. Finally, at the end of those two weeks, they were flea-free, had ravenous appetites, and were steadily gaining weight. Once healthy, I started advertising the kittens on my Instagram account for fosters. The kittens received several inquiries resulting in one pre-adoption and another scheduled meet and greet. The kittens were then scheduled for their spay and neuter surgeries in preparation for their upcoming adoptions.

A call came from the shelter manager to let me know the surgeries went well, but there was some bad news: the kittens had all tested positive for FIV. Immediately my heart sank, but not for the reason you might think. Due to a general lack of knowledge surrounding this condition, FIV+ cats and kittens in shelters are often overlooked for adoption. At Pet Alliance, it is not uncommon for entire litters of kittens to be adopted within hours of being put out on the adoption floor, but I knew it was going to be tougher to get the Easter kittens adopted due to their FIV+ status. The pre-adoption and meet and greet both fell through after I communicated the results to the potential adopters.

I devised a plan to help educate potential adopters on FIV — and to encourage them to open their hearts and homes to FIV+ kittens. First, I worked with shelter staff to create an FIV fact sheet that would be displayed on the adoption cages. Second, I suggested to shelter staff that the adoption fee be reduced to two kittens for the price of one to encourage people to adopt the kittens in pairs. Third, I shared the picture of the kittens along with the FIV fact sheet across social media and encouraged others to share their story as well. The story of the FIV kittens spread like wildfire, and even some big names in the animal rescue world, such as Oskar the Blind Cat, Homer Blind Wondercat, Cat Man Chris (Cole and Marmalade), Meowbox, and Imogenthekitten shared their story.

Below are some basic facts about FIV that potential adopters should consider. Additional information is available at Best Friends Animal Society and Cornell Feline Health Center.

Due to the enthusiasm of Pet Alliance and the compassion of many people across social media, the Easter kittens were all adopted within one week of being in the shelter.

Raising awareness about FIV in kittens through social media and blog posts like this are good first steps, but awareness needs to turn into action. My hope is that after reading this, you are inspired to spread the information and to open your heart and your home to an FIV+ cat or kitten.