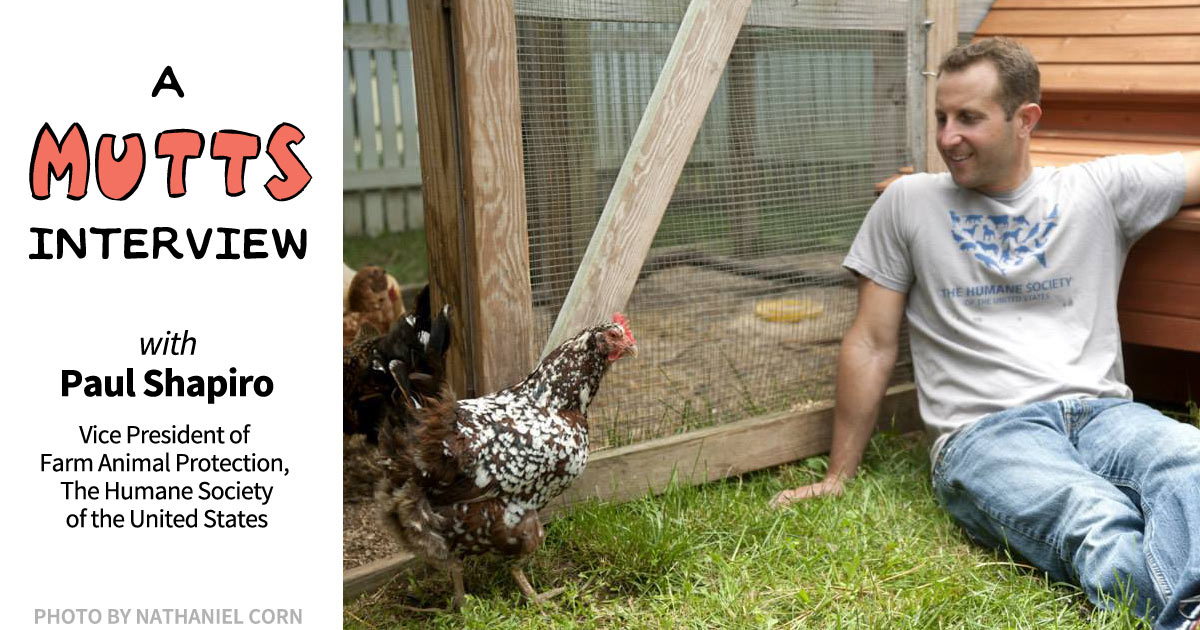 Paul Shapiro has served as the vice president of farm animal protection at The Humane Society of United States since 2005. He also founded Compassion Over Killing in 1995 and served as its campaigns director until going to the HSUS.

Tell us about your favorite companion animal.
George was a three-legged pit bull-sharpei mix I adopted and lived with for the last seven years of his life. He was an amazing animal who never seemed to notice his missing leg. George loved to go running with me and was such a popular fellow in the neighborhood that everyone knew him—including many neighbors who never knew my name but always knew his!

What are you reading, watching, listening to?
I recently read Sapiens: A Brief History of Humankind, which I highly recommend. It’s a fascinating exploration of where our species has been, is now, and may go in the future. The author, Yuval Hariri, also helps the reader understand our history and its impact through both human eyes, and those of other animals.

What’s your favorite vegan meal?
Well, as a vegan for the past 21 years, I’ve certainly eaten a lot of them!  Difficult to pick just one, but it’d be pretty hard to give up my addiction to bean and rice burritos.

Do you have any favorite vegan food jokes?
What’s it called when one chickpea murders another? Hummuscide!

As a child, what was your favorite comic strip or children’s book?
I was in third grade when a friend told me about Calvin and Hobbes. From the moment I started reading it, I was hooked. Like many young boys, I saw myself in Calvin—in how he related to adults, other kids, and especially animals. And now when I read it as an adult, I see just how smart and biting Bill Watterson’s social commentary was, which I’m sure I didn’t really get as a kid. But man, did I love when Calvin read his dad his polling numbers among six-year olds!

Describe a moment in your life that changed everything.
The first time I walked into an egg production facility and saw, with my own eyes, factory farming’s sheer depravity—turning sentient individuals into assembly line production units. Seeing chickens—social, smart animals—crammed into cages where they can barely move an inch their whole lives was an experience I’ll never forget, and it’s helped shape my life and career.

What can be done to help the planet?
The easiest way we can each help animals and the planet—and ourselves, it turns out—is simply to enjoy more plant-based meals and eat fewer animal products like meat, eggs, and dairy. Every time we sit down to eat, we make a choice about what kind of a world we want to live in. Folks can get started with these free, awesome recipes.

What would be your dream come true?
Well, I wouldn’t mind Bill Watterson coming back to write Calvin and Hobbes again! But that seems pretty unlikely. Of course, what I really dream of is a world in which our relationship with our fellow creatures is no longer based on violence and domination, but rather is based on compassion and respect. That may seem impossible to some, but at one time, so did many other advancements our society has made. I truly believe that future generations will look back on our mistreatment of animals—especially those used for food—with utter revulsion, and I’m honored to play a role in the social movement that’s bringing that dream closer to reality.

How can we help?
The MUTTS platform is (not surprisingly!) huge, and the influence the comic has in promoting compassion to animals is great. We need more! My hat’s off to you—thanks!

Where can we find you for more information?
http://twitter.com/pshapiro