Heart To Heart is here! • Learn the Backstory | Get the Book 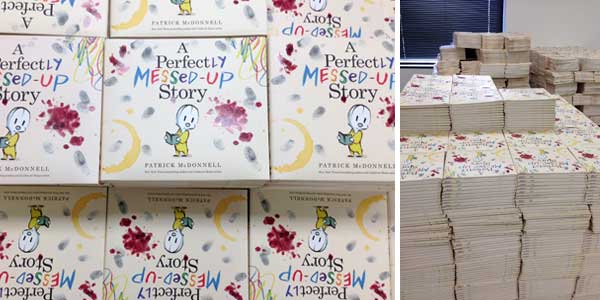 Patrick McDonnell spent a busy August day at the warehouse of Hachette, publisher of his new picture book, A Perfectly Messed Up Story. Those hands that draw the MUTTS strip were hard at work, signing his name in five thousand copies!

The book will be released this fall on October 7, 2014. “APMUS” features Little Louie whose story keeps getting messed up, and he’s not happy about it! But when he stops and takes a deep breath, he realizes that everything is actually just fine, and his story is a good one–imperfections and all. These signed copies are headed to Barnes and Noble stores across the U.S. and to Indigo stores in Canada.

And don’t worry, dear readers … Patrick got a break for lunch to rest those weary fingers.