Recently, we posted an article showcasing some of our favorite MUTTS comic strips. We also asked members of the MUTTS community to send us their favorite strips, along with some thoughts about why those particular images are so close to their hearts. Here’s what our readers had to say:

Simone Wilde: “Finding MUTTS has been one of my greatest joys! The one from April 9, 2015 is my favorite because EVERY DAY I go through this. I was even fortunate enough to meet Patrick and get him to sign one for my dog Little Swami.”

Daria Darnell: “March 17, 2015 is my favorite. It’s so joyful and captures the essence of spring perfectly — that feeling of being outside and wanting to run or skip with the sheer pleasure of not wearing heavy sweaters and being able to feel the sun on your face.”

Denise Carr: “My favorite strip is the one from August 8, 2008, ‘Footprints.’ When we are at our winter home on Sanibel Island, FL (which welcomes all dogs), we frequently walk our dogs on the beach. In years past, we have had older dogs who were sometimes too tired to make it all the way back, and we have carried them. These dogs are no longer with us to walk on the beach, except in spirit. When I see this strip, it reminds me of happy days with them. I have the strip hanging on my kitchen wall.”

Jeanne Rose: “Without a doubt, my favorite MUTTS strips tell the story of Chickpea and Chickpea’s Brother. Being a cat lover, this endearing Shelter Stories series became a bit of a cliffhanger for me, and the outcome was completely heartwarming.”

Denise Garrett: “I have a soft spot for chained animals (especially dogs), and Guard Dog speaks directly to my heart. I have shed many a tear seeing Guard Dog’s strips. I also have to admit, I have ‘rescued’ many ‘guard dogs’ in my town. My latest is a Dachshund/King Charles mix who lived on a chain. My breaking point (after sending several anonymous letters, to no avail) was when it was 14 degrees outside and he was curled up in a ball, on the ground with frost on his back. He now sleeps on a queen size bed, and his little tail never stops wagging!”

Christie Rogero: “This strip was already incredibly moving, and when I was doing outreach work to help animals at risk, it spoke to me that much more. My co-worker Shannon and I regularly helped outdoor cats and dogs to get protection from the elements as a part of our spay/neuter and wellness outreach in under-resourced areas. We loved this strip so much that we each had it permanently tattooed on our arms (mine had the addition of Shtinky, since cats were my big focus). We now carry the animals we cared for everywhere we go!” 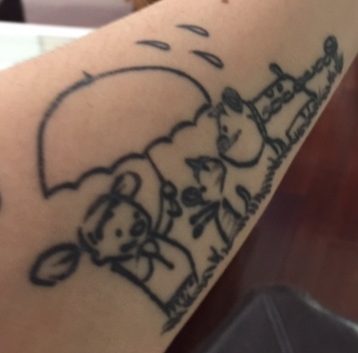 Karen Eckhoff (and Bindi and Dorje): “My favorite MUTTS of all time is March 18, 2007 ‘Shpring Has Shprung!’ A close second is ‘Happy Leap Year,’ where Mooch jumps onto Earl’s head (Dorje is a shoulder-sitter). Hope you are all safe and warm during this ‘shpring’ weather! Bindi and Dorje send their love!”

Chris Zeller: “My favorite strip is the one from February 11, 2009. Millie is dancing with Moochie. ‘The heart that loves is forever young.’ To me, Moochie — in almost every aspect — is so much like my own cat Alfie, who was a very sick, small stray full of fleas when he entered my life four years ago. But so alert, and full of sparks and love for life! He enjoyed every single moment of those four years to the fullest, and yes, sometimes I was dancing with him like Millie did, and yes, he cheered me up to no end. Sadly, Alfie’s way ended on January 30; but wherever he is now, I’m certain lots of fun and dancing is still involved. And love. Absolutely.”

To our awesome readers whose responses weren’t included here: We heard from SO MANY of you, which was terrific! Unfortunately, it also meant we were unable to include every message we received. Please know, though, that we’re truly appreciative of everyone who took the time to share their thoughts with us.