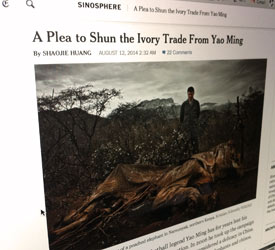 Chinese superstar NBA player Yao Ming is using his fame to help Africa’s rhinos and elephants desperately in need of protection. The New York Times’ Sinosphere blog recently featured Yao and the new documentary “The End of the Wild” made with the WildAid organization. His work on this project is especially important as China’s rising middle class drives the ivory trade, and thus the horrible practice of poaching.

The Times article says, “Ivory and rhinoceros horns are valued in China as status symbols, and conservationists warn that the huge demand in China is the primary force behind poaching and smuggling in Africa. In 2012 alone, 22,000 elephants were killed for their tusks across the continent, according to a monitoring program of Cites, the Convention on International Trade in Endangered Species of Wild Fauna and Flora. Most of the smuggled ivory was destined for China.”

Please watch and share this important work to help spread the word about some of our planet’s most endangered animals.