Since childhood, I’ve always had animal friends. I’ve had plenty of dogs, a fish, a gerbil, and even a chicken. The one animal I was not allowed to have was a cat; my family weren’t cat people. I vowed that when I became an adult, I’d finally experience having a cat as a best friend.

Fast forward 10+ years later, I was ready to keep my promise. For months, I told my friends and family that I would be getting a cat in the near future. I talked to my apartment managers to discuss details (such as pet deposit fees) and searched Facebook groups for adoptable cats in my area.

Everything was on track until COVID-19 and the subsequent nationwide quarantine hit. Not only did I need to begin sheltering in place, but I was also laid off from my former job as a result of the virus and company downsizing. I immediately started making financial changes to save money, but when quarantining alone got the best of me, I’d find myself back on Facebook, searching for a feline friend. I wanted one more than ever, but I wasn’t sure it was a good time to move forward with my plan as I was worried about the financial and health risks.

“I want a black cat,” I told my best friend one day. It was brought to my attention that black cats, despite some negative modern-day superstitions, were once highly regarded and even considered sacred in ancient Egypt.

A week or so later my friend Facetimed me, explaining that she’d discovered eight kittens alone in her backyard, with no mother cat to be found. Her neighbor took seven of them, but she’d kept one just for me. On our call, she showed her off — the smallest and cutest black kitten I’d ever seen. I couldn’t believe it! And just like that, I was a cat mom. 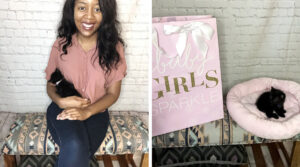 The first time Onyx and I met, I was nervous. She had been living with my friend for three weeks, so I was was worried she wouldn’t take to me. We met in the park for a social distancing meet-and-greet. She was literally a handful. She gazed at me for a while as I held her, and I learned that cats don’t blink as often as humans or dogs. Soon after, she peed on me and went to sleep in my lap, and that’s when I knew I had been “chosen.”

Our first full day together was long, tiring, and rewarding. I’d just recently received the news that my aunt had passed due to cancer, so I decided to get her ahead of schedule as a happy distraction. I was excited to get her home, but once we got there, I looked around my apartment in horror. I no longer saw my cozy home; I saw plenty of places where she might get lost, stuck, or harm herself. I kept her at my side the entire day.

The next day I decided to make some changes. I wanted to prove that I was capable of taking care of someone other than myself. I cat-proofed my apartment by removing all hazardous items from my floors and blocking off areas where I wouldn’t be able to reach Onyx if she got stuck. I panicked the first time she left my sight, but thanks to her collar bell I found her safely relaxing under the sofa. From there, I learned to relax more.

The first week was fun, but there was also plenty of trial and error. For instance, I experimented with three types of litters before discovering which one was right for Onyx (and for my apartment). I gained plenty of scratch scars during her first bath. I even took her to meet my family, and — would you believe it? — she melted their hearts and converted them to cat lovers. 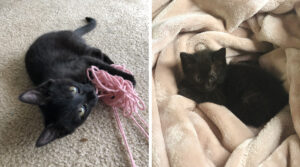 I worried that getting a cat during quarantine would be a bad idea, but Onyx has been one of my best leaps of faith. I love it when she discovers a new skill and does it continuously as if to perfect it. I love taking cat naps with her. Through her, I’ve even been able to get a small glimpse into parenthood. Being a cat mom can be tough work, but it’s worth it. Though we are in odd times, she came right on time, and I wouldn’t have it any other way.

And please have your kitty spayed 😺

From Egypt, her "Ketah’s brothers and sister, are saying, “Thanks the gods…”

Loved the comment about getting peed on! Tiny kittens will do that! She is beautiful and you will find that having a cat is one of the very BEST things in life!

I was kinda gonna say that too. They don’t need regular baths like dogs do. I thought maybe she had had a “accident” tho.

Dear Brittany, What a charming story. Please accept my condolences on the passing of your aunt. You and Onyx are perfect together. One word of caution if you please, cats and kittens like to chew on but then subsequently ingest things like yarn, string or thread. I personally know of an adult cat that actually ate a ball of knitting yarn and passed away from internal damage as a result. Occasionally, I will use a string to play with one of my cats, but only under very close supervision as I keep all of those things in drawers and out of their sight. Much Love. Adrienne

be careful with the yarn, that is a supervisory toy. have fun with your new fur baby.

Loved your story Brittany. You sound like you’ll be a great cat mom!

Brittany, Thank you for sharing the story of you and Onyx finding each other. What an adorable name, suits her perfectly! I can tell you will be a loving cat mom. Cyber hugs to you both, Susannah

What a sweet and inspiring story—thank you for sharing!

What a beautiful kitty.