At some point in life, every dog lover gets lucky and finds their “heart and soul” dog. Ours happened the first time, with one very special Jerry G. Dawg. My wife Rene and I adopted Jerry from the local shelter in 1998 while launching a small marketing business from our home office in rural Northern California. The little six month-old puppy became our Chief Fun Officer, and kept us sane while we worked long hours. Every day, that laid-back canine waited patiently for play dates at the beach or a romp in the yard. He loved everybody, and everybody loved him. Jerry was what dog trainers refer to as a soft dog. He was our easy child and we naively assumed all dogs came that way.

Eight years later, everything changed. After one of our weekend hiking trips with Jerry, vets discovered bone cancer in his front left leg. They recommended amputation as a way to extend his quality of life, but warned us that Jerry’s time with us was limited. “Amputation won’t get rid of the cancer,” he said, “but it will get rid of the pain.” More pain-free time with Jerry seemed like a no-brainer, so we proceeded and hoped for the best.

As payback for all the good times Jerry gave us, we decided to take him on the road trip of a lifetime. Within six months, we sold our business, our home, and nearly everything we owned to buy a new RV and take a year off to travel together as a pack. In June of 2007, Rene and I hit the road — with our three-legged co-pilot leading the way. Jerry thrived against all odds, and loved life on three legs for two years as we roamed around the country. Along the way, he taught us to live life to the fullest, to embrace change, and take each moment as it comes. We traveled from coast to coast, from the desert to the Rockies and back again. Then, in October, 2008 the cancer caught up with Jerry, and we set him free under the big Montana sky near Yellowstone National Park.

Jerry’s resiliency on three legs inspired us to create Tripawds, now the largest online support community for three-legged pets and their people. Rene and I tell the whole story of our travels with Jerry, and how Tripawds came to be, in our book Be More Dog: Learning to Live in the Now.

Of course, there’s never just one dog who finds a way into a dog lover’s life, and we were no exception. Nine months after Jerry got his angel wings, a Tripawds member introduced us to Wyatt Ray Dawg. He was a strikingly handsome eight-month old German Shepherd puppy who lost a rear leg from neglect. Wyatt shared a lot in common with the MUTTS character Guard Dog. He was an inner-city dog left tethered and neglected in a backyard. Excited for attention or eager to escape, his confinement caused the chain to wrap and strangulate his right rear leg. A Tripawds member involved with a local animal rescue helped save Wyatt, who ended up abandoned at a vet clinic. Knowing we were missing a dog in our life, he proclaimed: “You need a new spokesdog.”

Rene was all in, but I wasn’t ready, or so I thought. I kept telling myself, “How could any other dog ever compare to Jerry?” And that was my problem: I compared. Jerry was the first dog Rene and I welcomed into our life. His passing left a large hole in our hearts and I was almost certain that no dog could ever fill his pawprints. But all it took was seeing that gorgeous Shepherd’s adoption photo to say yes. Eight-month-old Wyatt joined our pack and became our road dog.

Fresh from his amputation recovery and into his new life of freedom, our real-life Guard Dog Wyatt Ray met Patrick McDonnell at a book signing for Wag! It was the fall of 2009, and Wyatt was headed south with us for winter. I wanted to tell Patrick that my favorite MUTTS strip — at the center of his Guardians of Being book — defines why we hit the road with Jerry. That “NOW! NOW! NOW!” strip from March 2008 is still inside our medicine cabinet today. It’s the one I describe on screen in the PBS documentary that features Jerry’s story, called Nature: Why We Love Cats and Dogs.

Excited to share our story with Patrick, I approached him after the reading. “I just want to tell you how much your work has meant to us,” I said. Then I quickly explained the comic strip we study every day, and asked if we could record a quick interview. As I told Patrick about our situation, a look of astonishment appeared on his face. “Heyyyy … I know who you guys are!” Patrick had seen the PBS show; he remembered us! We left the signing feeling elated that he met Jerry’s successor, and with so much more. During that signing, Patrick agreed to create the foreword for our Be More Dog book, which would take us another nine years to publish. He also drew Guard Dog off leash, something he had never done within the panels of MUTTS. (Not yet, at least.) After meeting Wyatt, Patrick gave us that drawing. We treasure it even more, now that Wyatt is running free.

Over the next dozen years, Wyatt worked hard representing the Tripawds Foundation at veterinary conferences, to spread the word about our resources and assistance programs for pet parents coping with amputation for a dog or cat. As he aged, Wyatt helped us educate our community about caring for senior amputee dogs. Then, on November 10, 2020, after twelve years on one rear leg, he helped us come to terms with setting him free from a body that no longer served him. 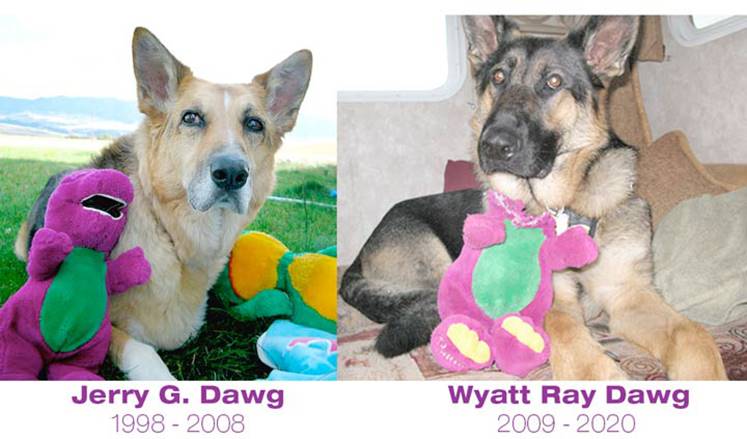 There Is No Comparison

When we create a special bond with a dog or cat, we open our hearts and allow their unconditional love to consume us. We care for them the best we can, and when it’s time for them to leave their earth clothes behind, their absence creates a deep hole in our hearts that feels eternal. Our grief convinces us we could never love another. At some point though, we turn around and do it all over again.

Looking back at our years together, I know that I unfairly compared Wyatt to his predecessor. It was easy to do because he tested us in ways that easy-going Jerry never did. Despite all our attention and training, Wyatt was leash aggressive, destructive, anxious, and had a terrible habit of eating inappropriate objects (landing him in the hospital numerous times). During the many trying occasions when he tested our patience, I shook my head and asked him “Why? Jerry would never do that!” I could almost hear him saying, “Jerry this, Jerry that … Jerry! Jerry! Jerry!”

It was tough to see through the drama, but now I know that Wyatt’s lessons were just as important as Jerry’s. They were just more difficult to learn. For example, that dog’s challenging personality helped us to become more acceptant and tolerant. At the heart of his antics, he was also trying to show us how to live in the Now. He just happened to teach it in an entirely different way. And while we often grew frustrated with his unconventional methods, now I see that he never gave up on us. Wyatt remained a steadfast guardian of our very being until the day he died.

Some day when dog number three finds a way into our hearts, I promise to not unfairly compare that new kid. I will walk the talk of that MUTTS comic strip, live in the Now, and learn to Be More Dog with whatever lessons our next canine has in store for us.

About the Author: Jim Nelson and his wife Rene Agredano founded the Tripawds pet amputation support community in 2006 when their dog Jerry lost a leg to cancer. MUTTS creator Patrick McDonnell created the foreword for their book, Be More Dog: Learning to Live in the Now.

This posting made me howl…….one of my rescue doggies will probably lose her front left leg, too, thanks to being abused in her first year of life. Once her painkillers no longer help it will happen and I messaged the Tripawds folks a couple of times on Twitter (before they kicked me off) and they were really helpful. When the time does come I am sure I’ll be seeking their great advice once more.
Thanks for the lovely article. XX

Oh this post resonated with me very much. I too had a heart pet…a cat actually. Her name was Dusty and lived to almost 14 years old but cancer caught up with her too. Like your story with Jerry and Wyatt I felt myself comparing. I still have yet to adopt as I feel like I’ll never find another heart cat like her. However, my love of animals far outweighs not having paws in the house and helping so I foster. (On a pause now since COVID 19) Thanks for sharing your story and creating a community for pet parents and their three-legged friends. I’m sure your fur kids that earned their wings are so proud to have called you Mom and Dad. :)