Great news, friends! Patrick McDonnell’s picture book The Little Red Cat Who Ran Away and Learned His ABC’s (the Hard Way) has been included in The New York Times’ list of Notable Children’s Books of 2017, and in Publishers Weekly’s Best Books of 2017 list.

The Little Red Cat, released in September of this year, has received four starred reviews and praise for offering an exciting new take on the traditional alphabet book. The mostly wordless story follows a red cat who embarks on an adventurous chase — and meets an alligator, a bear, a chicken, a dragon, and much more along the way. Below is a recap of some of the great reviews this book has received so far. 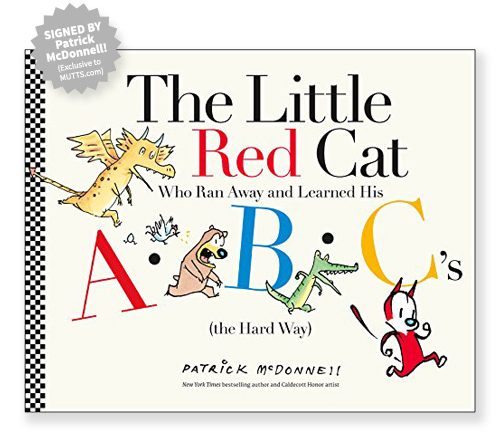 “Give this book an F, yes, an F: for fun and funny.” — Kirkus Reviews, starred review

“Touches of wit and plenty of zip recommend this for lap-sit sharing.” — Horn Book, starred review

“A brilliant capter that young readers will want to pore over!” — School Library Journal, starred review

“McDonnell’s work once again proves to be silly, sweet and even timeless.” — The New York Times Book Review

Want to purchase The Little Red Cat for your own bookshelf (or to give as a gift)? Visit the MUTTS Shop, where every copy includes a bookplate that’s been hand-signed by Patrick McDonnell!

Want to stay updated on all MUTTS news? Visit our homepage to sign up for our email list, and get the daily MUTTS strip delivered directly to your inbox!